Avalon, this is a word that if you are a Southern California dancer should be no stranger to you. If you aren’t (or are behind the times, tsk, tsk) allow me to explain. Avalon is a historic city on Santa Catalina Island (often shortened to California locals as Catalina Island), in California, that contains one of the most beautiful ballrooms, The Casino Ballroom in the United States. This picturesque location is immortalized in a jazz standard with the same name as the city, ‘Avalon’.

Perhaps the sentiment I am trying to express can be best summed up by this quote,

“’Avalon’ is practically an advertisement for the resort town on Catalina Island off the coast of California which was a popular resort destination for the film community of Hollywood.” -Chris Tyle

Originally Santa Catalina Island was inhabited by the Gabrielino/Tongva Native Americans, until about 1930 when most of them died off or migrated to the mainland for work. [1] However in 1887 a gentleman by the name of George Shatto purchased the island for $200,000 with the intentions of developing it into a resort town. According to wikipedia: His sister-in-law Etta Whitney came up with the name Avalon, which was pulled as a reference from Alfred, Lord Tennyson’s poem “Idylls of the King”, about the legend of King Arthur.

Mr. and Mrs. Shatto and myself were looking for a name for the new town, which in its significance should be appropriate to the place, and the names which I was looking up were ‘Avon’ and ‘Avondale,’ and I found the name ‘Avalon,’ the meaning of which, as given in Webster’s unabridged, was ‘Bright gem of the ocean,’ or Beautiful isle of the blest.’ [2]

To quote Wikipedia about the Arthurian legend origins of this island city,

Avalon (probably from the Welsh word afal, meaning apple; see Etymology below) is a legendary island featured in the Arthurian legend. It first appears in Geoffrey of Monmouth’s 1136 pseudohistorical account Historia Regum Britanniae (“The History of the Kings of Britain”) as the place where King Arthur’s sword Excalibur (Caliburnus) was forged and later where Arthur was taken to recover from his wounds after the Battle of Camlann. Avalon was associated from an early date with mystical practices and people such as Morgan le Fay.

Unfortunately in spite of Shatto’s efforts to develop the island he defaulted on his loans and was forced to sell the island. However in 1919 a chewing gum magnate William Wrigley Jr. bought a controlling interest in Santa Catalina Island and its associated properties. [3]

In 1929, Wrigley built the Catalina Casino over the site of a previous dance hall known as the Sugarloaf Casino. Throughout the 1930s the Casino Ballroom hosted many of the biggest names in entertainment, including Benny Goodman, Stan Kenton, Woody Herman, and Gene Autry.  [4]

To quote the Los Angeles Times,

“Catalina was Hollywood’s home away from home, and casino gigs were highly sought after. The concerts were broadcast across the country on radio, enhancing the venue’s popularity. Thousands of concertgoers paid $2.25 each to take the Great White Steamer from San Pedro on the mainland to Avalon. Then they danced to big band music, thanking their lucky stars that the concerts themselves were often free, thanks to the building’s founding father, chewing gum mogul William Wrigley Jr.”

To give one an idea of the grandeur of this place again I will quote the L.A. Times writer McClure,

“The casino, 12 stories tall and ringed by balconies that overlook the bay, was believed to have the biggest dance floor in the world when it was built. It was called a masterpiece of Art Deco design that “receives patrons at its doors from seaplanes, yachts and motorcars,” according to a 1929 article in the Catalina Islander newspaper.”

Exterior of the Casino Ballroom

An important detail for dancers, the Avalon Ball website writes how the floor was constructed at the Casino Ballroom,

The ballroom dance floor was carefully constructed of maple, white oak and rosewood that rest on a layer of felt and acoustical paper. The felt and paper are installed over a subfloor of pine that floats above the support beams on strips of cork. Such careful attention was given to the dance floor to ensure a smooth and comfortable dancing experience for the building’s many visitors.

This part of the post is what I am assuming most swing dancers would be familiar with, the jazz standard known as ‘Avalon’.  It was   a 1920 popular song written by Al Jolson, Buddy DeSylva and Vincent Rose. 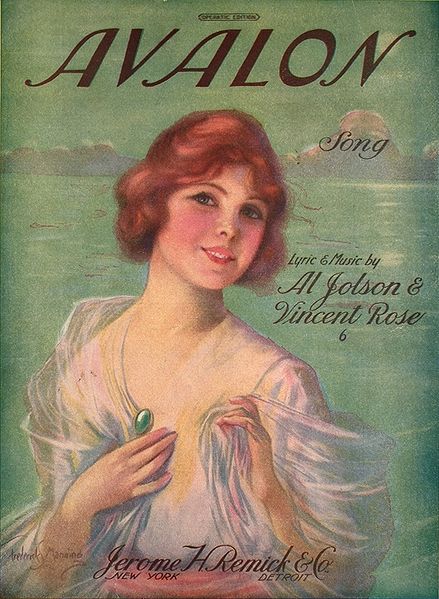 “A popular jazz standard, the song has been recorded by many artists, including Cab Calloway (1934), Coleman Hawkins (1935) and Eddie Durham (1936). The Benny Goodman Quartet played the song in their famous 1938 Carnegie Hall concert. The song was included in the biographical films The Jolson Story (1946) and The Benny Goodman Story (1956), and is also being noodled by Sam (Dooley Wilson) at the piano right before he plays As Time Goes By in the movie Casablanca (1942).“

In the original lyrics of the song there are two versus and a repeated chorus, though in most performances of the song that are non-instrumental only the chorus is frequently sung.

I found my love in Avalon

I left my love in Avalon

I dream of her and Avalon

From dusk ’til dawn

And so I think I’ll travel on

For reference here is a 1937 performance of ‘Avalon’ by Benny Goodman and his Orchestra:

In Context with the Contemporary Swing Dance Community

The Casino Ballroom at Avalon is still used by the Lindy Hop community. Small events are sometimes sponsored there, but it is most notably featured by the Catalina Jazz Dance Festival.

When I think of Avalon I get slightly nostalgic because of the history and meaning the place has in a myriad of ways. The song ‘Avalon’ is one of my favorite songs to Balboa to and for myself as a Southern Californian brings memories of home when I am away.